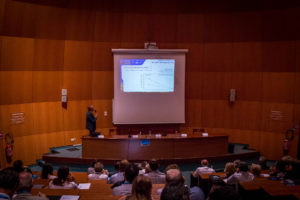 The Artois University, on its campus of Arras, welcomed the 25th Symposium EPNC (Electromagnetic Phenomena in Non-linear Circuits) on 2018, from the 26th to 29th of June 2018. The colloquium organized together with The Faculty of the Electrical Engineering) of the Technological University of Poznan, the Faculty of Applied Science (U. Artois) and with the support of the cluster MEDEE.

EPNC 2018 received the support of scientific organizations (L2EP, the CE2I program of the CPER), from academic institutions (Polish Academy of Sciences, Polish Society for Theoretical and Applied Electrical Engineering, the Faculty of Applied Sciences). The results of the works presented during this colloquium will be the object of comment publication in IJAEM (International Newspaper of Applied Electromagnetics and Mechanics) and COMPEL.

EPNC 2018 addresses non-linear issues in magnetic and ferromagnetic circuits, semiconductors, wave propagation and optical devices, non-linear electromagnetic problems. Its applications have a large spectrum, such as medicine, electric and hybrid vehicles, renewable energy production systems. As such, French and foreign manufacturers such as Renault, ABB, Siemens, Altair … showed their interest during this event and actively participated in the various sessions.