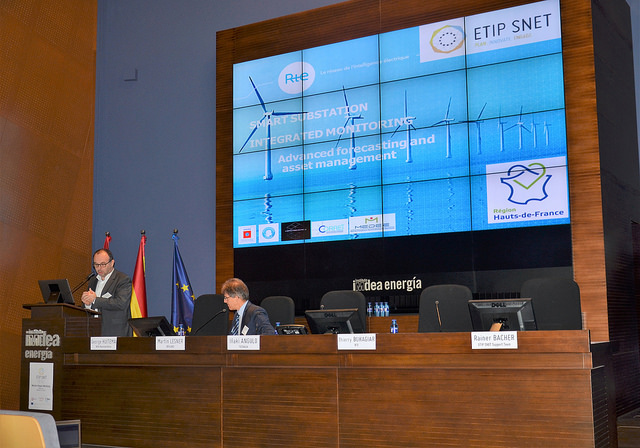 On 22 and 23 November 2018, the Regional Workshop of the ETIP SNET “European Technology and Inno-vation Platform Smart Networks for Energy Transition” was held at IMDEA Energy (Madrid).

Three French projects were presented, including the Smart Substation project – one of which is located in the Somme in Hauts-de-France – by Mr Thierry BUHAGIAR (RTE), which generated great interest in the room !

What is at stake ?

France is traditionally absent from this type of European technology platform, which is reflected in its results when it responds to European calls for projects (few French projects).

Presenting French projects at this type of event helps to show and disseminate French know-how in the field of energy systems and smart grids.

It is also a very good opportunity to do quality European networking and give a European dimension to your projects. .

What is the ETIP SNET ?

The European Technology and Innovation Platform on Smart Networks for Energy Transition is the European Commission’s key contact for R&D&I in smart systems.

Its role is to represent the European community (companies and academics) and to provide the EC with topics, in particular for the publication of European calls for projects.

In practice, for example, it publishes roadmaps and operates via “working groups”.

About the “Regional Workshop” :

Each year, one Regional Workshop per “region” (in the sense of re-grouping several European countries) is organised.

The goal? Show and share what is being done in Member States to ensure coherence (and avoid duplication) between national actions identified in the field and the European R&D&I strategy (developed by ETIP SNET). The Western Regional Workshop consists of France, Portugal, Spain, Ireland and the United Kingdom.

In 2019, the Regional Workshop may take place in Lille… Information to be confirmed…!